Why is it that students always seem to get factor and multiple confused? In my search for an activity to reinforce these terms I came across a hundreds chart (as featured in the excellent TEDtalk by Dan Finkel). It is taken from the game Prime Climb made by the guys at math4love. 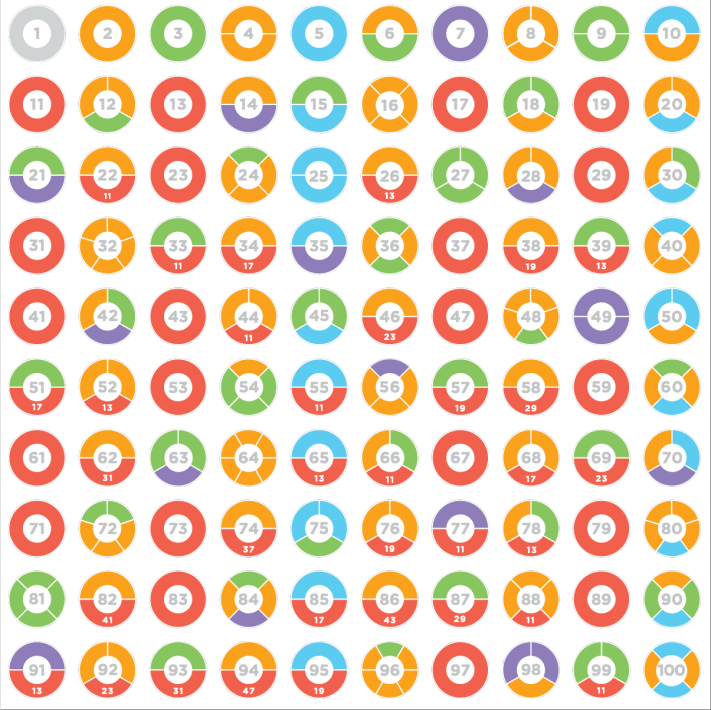 The chart goes up to 100 but we started off with a quick ‘I notice’ brainstorm by looking at the pattern up to 20 as a class. It allowed us to get past the simple – there are circles, there are different colours, the circles have numbers in them.

I made a variety of printouts available to the students – all downloadable from here. The students worked in groups to look for patterns and make generalizations, recording their ideas on their tables and on the sheets. I also set up a Todays Meet for the groups to share their ideas with the class.

After some time spent exploring the 100s chart we shared our big understandings. We used what we had discovered to make predictions.

It was clear from the conversations, comments on the chatboard, notes on tables, annotations on sheets etc that the students were able to identify the patterns but they were struggling to clearly communicate them.

I downloaded the todaysmeet transcript to read through as a class and highlight any mathematical language we could find:

After checking for understanding of these terms we looked at statements that were unclear or lacking any mathematical language or reasoning.

We took this statement: All the numbers that end with 0 has blue and orange

Everyone understood what this meant but agreed that it didn’t sound very mathematical. After working with partners to rewrite the statement we came up with:

All the multiples of 10 have an orange and a blue section.

We then moved on to reasoning and trying to explain why this would be true.

All the multiples of 10 have an orange and a blue section. This is because the factors of 10 are 2 (orange) and 5 (blue).

And with that statement the time was up. In the next lesson we will explore what the white numbers mean and dig into prime factorization. And, of course, get online to order the game!

View all posts by Amanda Klahn

One thought on “Factors & Multiples”